This is a protective antivirus software developed by Microsoft in September, 2009 to protect Personal Computers (PC) running on older versions of Windows 7 operating system from differs malicious software such as worms, Trojans, spyware, viruses, and rootkits. It is not available for PC operating on Windows 8 or later versions because they come with an in-built Windows Defender which perform the same role with Microsoft Security Essentials (MSE). Installation of MSE is seamless and both its upgrades and updates are automatic. It therefore means that with MSE rightly installed on your computer system, there would be no need to worry much about whether you PC is protected or not.

It runs quietly underground while you continue with your other work and the only time you get alerted by it is when there is a new update requiring your permission for installation. If you are bothered about a package using up your Hard Disk memory, the developers understand and as such, made it lightweight with minimal usage of your PC resources. This package is available for both the 32 and 64 Bits of Microsoft Windows 7 OS. It came as a replacement for the Windows Live OneCare which was a commercial antivirus service operated on a subscription basis. 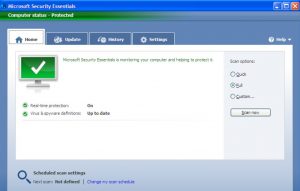 The bit of a system describes the way its processor known as the Central Processing Unit (CPU) handles information. For Windows 7 Operating System, there are two variants of this Bits – 32 and 64. A very large amount of Random Access memory is handled better and efficiently more by the 64-Bit version than the 32-Bit version of Windows. To determine which Bit is your system’s, click the ‘start’ button on your PC and go to My Computer. On this interface, look at the topmost left corner and you would find the “System Properties” option. Click on this and you would be re-directed to another page where you would see a list of your system’s properties. Check for your system type and you’ll know whether it is 32 0r 64 Bit.

Mechanism of Action of MSE

Microsoft Security Essentials (MSE) carry out its major task of providing real-time protection for windows 7 Operating systems by scanning and monitoring each file you open or download to your hard disk. Once a threat is sensed or discovered by it in any of the files, it would either hide or block the threat and then inform the user on which way he/she wants to handle the threat. In addition to reporting to the user, this antivirus software sends details as it were, of the threat(s) to Microsoft Active Protection Service (MAPS) where the malware threat’s profile is compared to Microsoft malware database. If it happens that the MSE has no definition for the threat, it downloads it from MAPS and immediately effect the deletion of the threat.

How to Install Microsoft Security Essentials on Your PC

Microsoft Security Essentials (64 Bits) can barely be protected better than it would be done by Microsoft Security Essentials. The operating system was developed by it in the first place and only those who birthed it can know how to protect it best. Besides this fact, with its strong firewall and anti-malware in-built capacity, your PC is protected to a very great degree from malicious agents capable of causing risk to your system. While there are no doubt different antiviruses out there which promise excellent protection just as MSE, many of them come at a very huge price and occupies considerable space on your PC’s Hard disk. For most of those antiviruses too, you have to periodically and manually update them to ensure optimal protection.